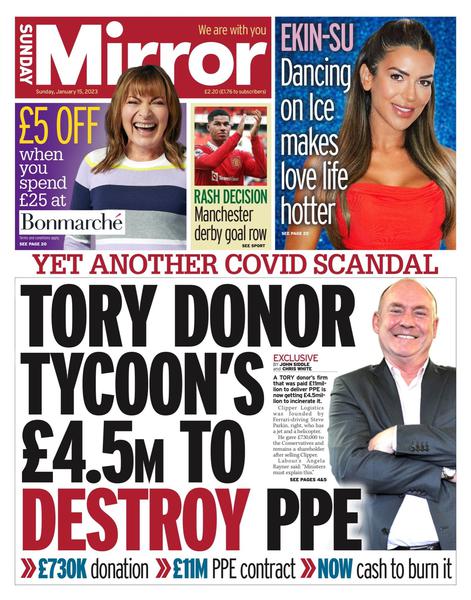 A Tory donor’s firm that was paid £11million to deliver PPE is now getting £4.5million to incinerate it. Clipper Logistics was founded by Ferrari-driving Steve Parkin who has a jet and a helicopter. He gave £730,000 to the Conservatives and remains a shareholder after selling Clipper. Gowns, goggles and surgical gloves will be incinerated. Two years ago Clipper – one of the UK’s leading storage and delivery groups – received £11million of taxpayer cash to deliver PPE. 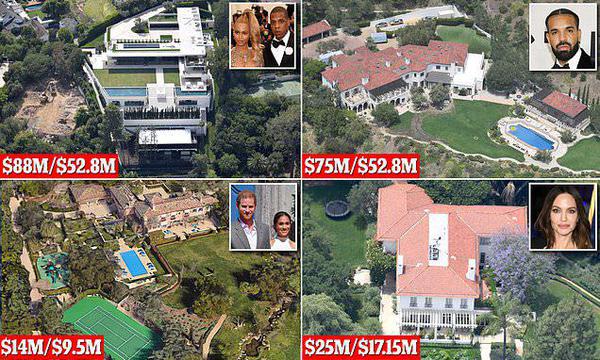 It's often said the more you earn, the more you spend, and that certainly seems to be the case with the world's most rich and famous. And while celebrities have fortunes and massive luxury homes most people can only dream about, with them come mortgages that most homeowners couldn't even fathom. Daily Mail did some digging into public records and can reveal which A-list singers and film stars took out mortgages for their pricey palatial homes. 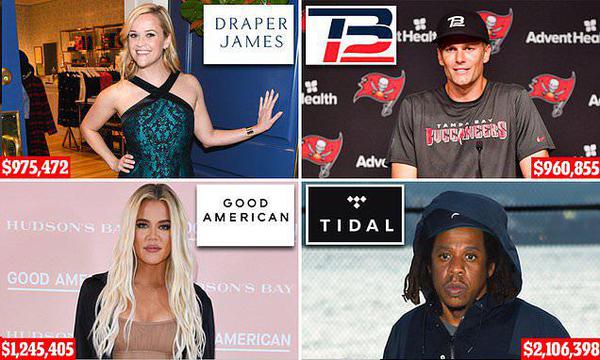 'Billionaire' celebs and politicians took millions in PPP loans, which were written off

The companies of mega-rich celebrities, including billionaires Kanye West and Jay-Z, received millions in government PPP loans – and in virtually every case the A-listers have been let off the hook for paying back the full amount. For the first time, we can reveal the exact amounts that these wealthy companies got through the Payment Protection Program, which was set up for desperate businesses hit by the Covid pandemic. In all but two of the cases we examined, the company was 'forgiven'. 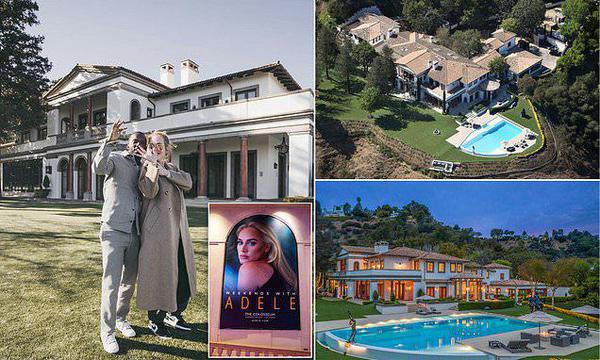 Adele has taken out a massive $37.7million mortgage on the luxury Los Angeles mansion she bought from Sylvester Stallone for $58million in February. The eight-bedroom, 12-bathroom home in the exclusive Beverly Park area is saddled with a massive home loan for the next 30 years, according to the deed of trust. It is estimated Adele is paying $227,000 per month - including property taxes and an assumed five percent interest rate - which is a big sum even for the singer. 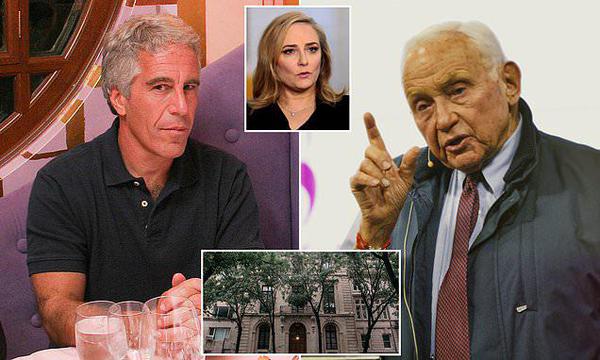 Victoria's Secret magnate Leslie Wexner gave Manhattan's largest townhouse to Jeffrey Epstein for just $1, he bragged to one of the pedophile's victims, telling her with a wink: 'He would do anything for me.' In an exclusive interview Maria Farmer said Epstein told her about the steal of the century when she was at the seven-story mansion on East 71st Street. 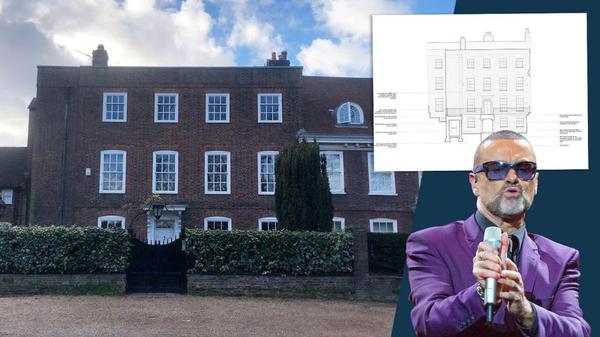 The new owners of George Michael’s £19 million north London home have been urged to drop plans, including for an “iceberg” basement, that would “ruin the legacy” kept by other stars who have lived there such as Sting and Annie Lennox. The property in Highgate is at the centre of a planning battle, with the new owners eager to make extensive renovations. Local groups are objecting with concerns that the plans will “alter the frontages of one of the finest rows of houses” in the area. In a letter 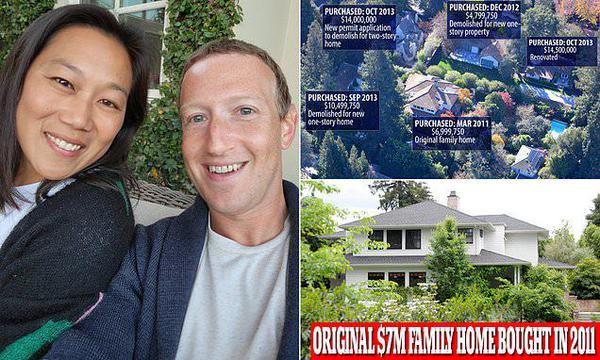 Mark Zuckerberg's $37million 'five-house compound' in Silicon Valley is pictured for the first time after years of complaints from neighbors over his plans to build a massive family estate. The 37-year-old founder and CEO of Facebook has transformed his original $7million Palo Alto home that he purchased in 2011 into a massive estate after buying the four surrounding properties for hugely inflated prices totaling $30million. 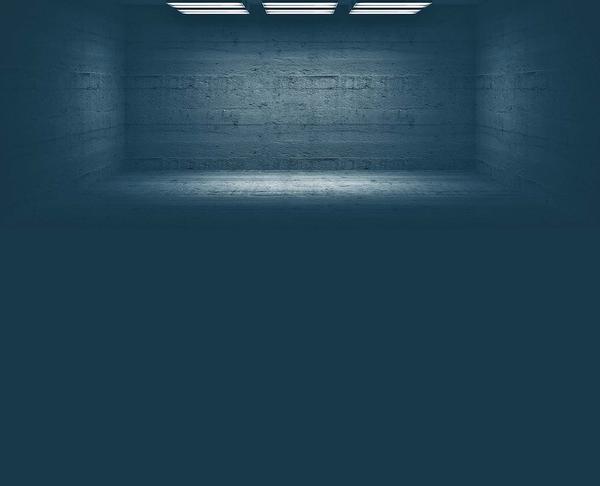 A 23-year jail sentence for a crime I didn't commit 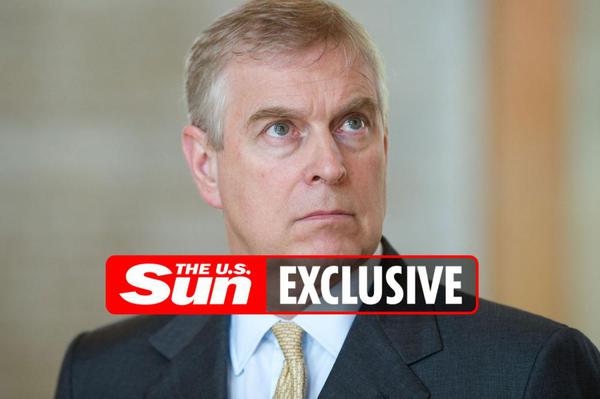 JEFFREY Epstein’s notorious Zorro Ranch had three computer rooms "the size of houses" to spy on famous guests including Prince Andrew, one of the pedophile's victims has claimed. Former employee Maria Farmer alleges footage would include the Duke of York's alleged seven-day stay at Epstein's 33,339 square foot desert estate in New Mexico in 2000. Epstein reportedly had the warped idea of using the ranch for inseminating women with his sperm with the aim of creating a 'master race'. 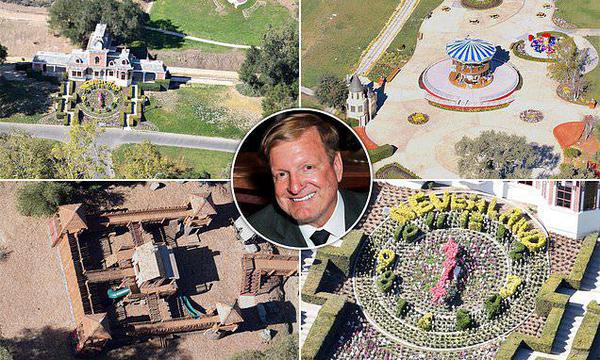 Michael Jackson's Neverland Ranch has been restored back into a 'children's paradise' after it sat rotting following the pop star's death. Billionaire Ron Burkle purchased Michael Jackson's Neverland for $22 million in December last year - and exclusive aerial photos show the work he put in to make it a fairytale land once more. The wealthy businessman has reinstalled carnival rides and repaired the train track, which wraps around the 2,700 acre estate. 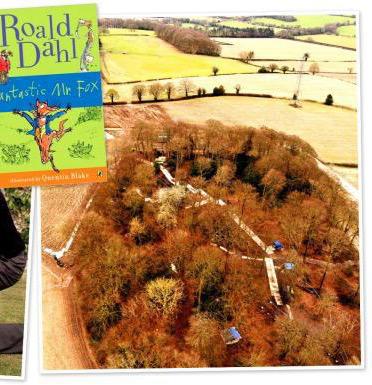 Diggers have started clearing a patch of ancient woodland said to have inspired Roald Dahl to write Fantastic Mr Fox. About 1.8 acres of Jones’ Hill Wood in Buckinghamshire, which spans 4.4 acres, are to be dug up to clear the way for the high-speed rail line. 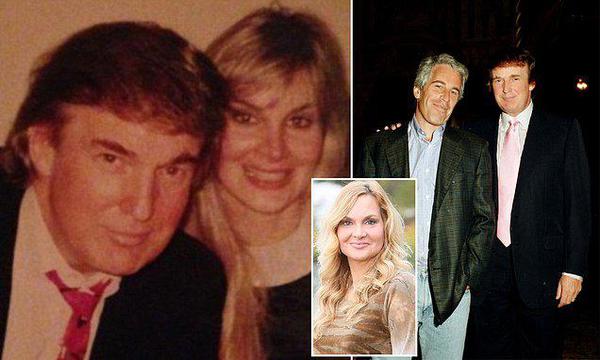 'Girl hound' Donald Trump and his 'wingman' Jeffrey Epstein would run wild together at beauty pageants, according to a woman who has accused Trump of sexual abuse. Celebrity make-up artist and former pageant organizer, Jill Harth, claims that they were the 'big cojones' in a group of rich and powerful men who became disturbing fixtures on the pageant scene. 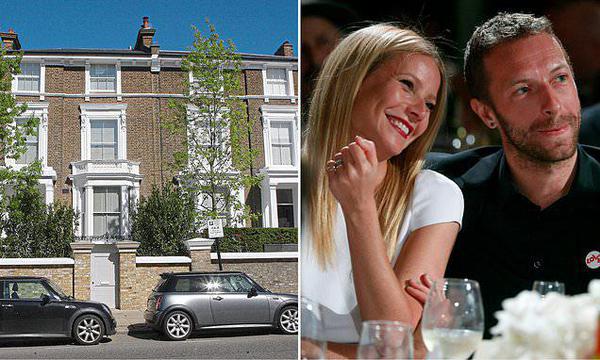 Coldplay singer Chris Martin has sold the mansion he once shared with Gwyneth Paltrow for a staggering £7 million profit, The Mail on Sunday can reveal. The vast 33-room home in the Primrose Hill area of North London is made up of two properties knocked into one. The couple bought the first for £2.5 million from Kate Winslet and her then husband Sam Mendes in May 2004. They then snapped up the neighbouring home for £3 million in 2009, before doing extensive building works. 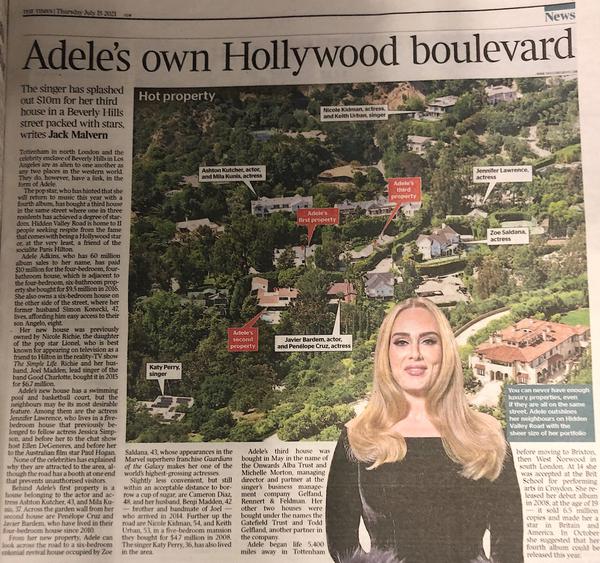 Tottenham in north London and the celebrity enclave of Beverly Hills in Los Angeles are as alien to one another as any two places in the western world. They do, however, have a link, in the form of Adele. The pop star, who has hinted that she will return to music this year with a fourth album, has bought a third house in the same street where one in three residents has achieved a degree of stardom. 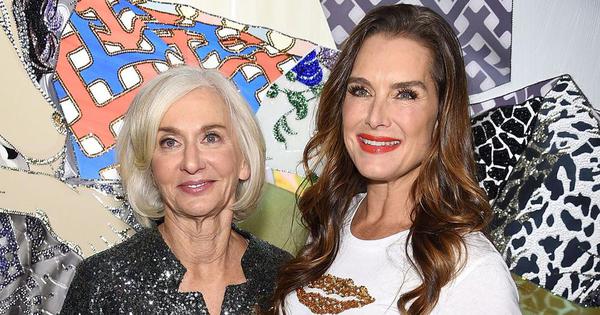 A former aide to Prince Charles has denied claims by a victim of Jeffrey Epstein that she introduced her to the billionaire paedophile. Former Prince’s Foundation vice-chair Eileen Guggenheim, now dean of the New York Academy of Arts, is claimed by a former student to have introduced her to Epstein, who later abused her. Maria Farmer, 50, alleges she flew to his New Mexico ranch in 1995 for a study trip where she was encouraged to flirt with him as he was a big NYAA donor. She claims she and her younger sister, Annie, were later abused by him and his alleged madam, Ghislaine Maxwell. 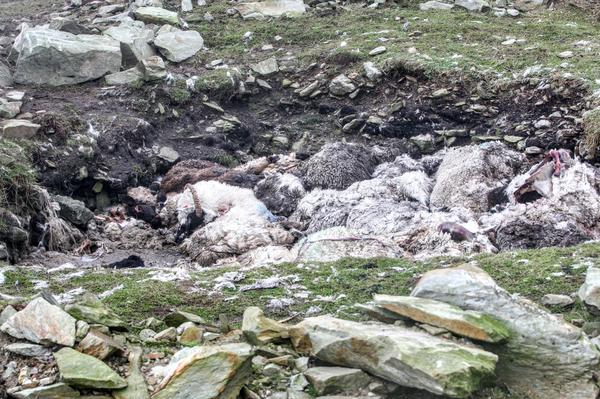 It is home to about 60 people, used to leading the quietest of lives in a beauty spot renowned mainly among birdwatchers who want to catch a glimpse of a red-necked phalarope. But the remote Scottish island of Fetlar, known as “the garden of Shetland”, is no longer the paradise that it seemed. An investigation has begun into animal cruelty involving the deaths of hundreds of sheep on a farm owned by the former directors of Erinaceous, a London property services company that collapsed owing more than £200m to creditors. 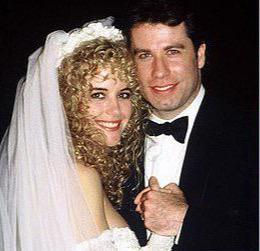 John Travolta faces a 'make-or-break' moment over his 45-year devotion to Scientology after the death of his wife Kelly Preston, as he defied the Church’s opposition to cancer treatments. Travolta somberly announced his wife of nearly 30 years had passed away on Sunday, July 12 from breast cancer at the age of 57, writing Kelly had 'fought a courageous fight with the love and support of so many'. 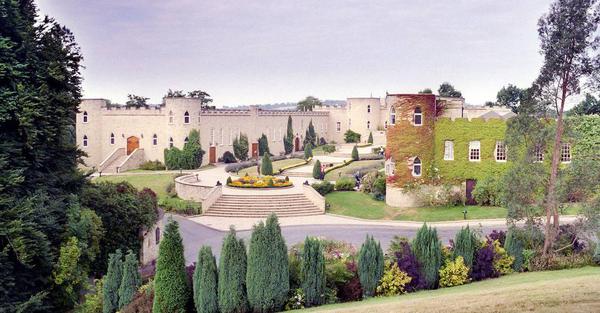 It's one of the most mysterious religions in the world, shrouded in secrecy, but new images give a sneak peek into the luxurious life enjoyed by those living at the UK headquarters of Scientology in East Grinstead, where A-list star Tom Cruise is believed to be staying during the coronavirus pandemic lockdown. The West Sussex HQ had a cash injection of $16 million in 2016, with the renovation updating it into a crash pad worthy of a world-famous star. 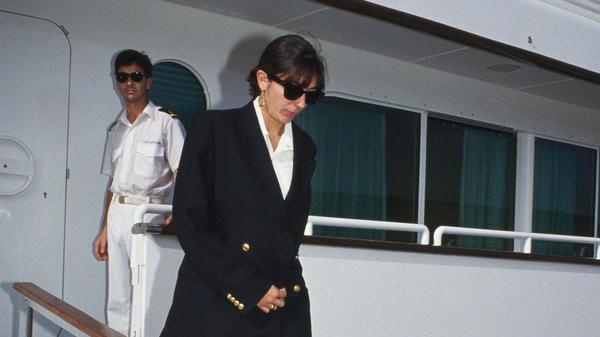 When Ghislaine Maxwell was charged with aiding Jeffrey Epstein’s sexual abuse earlier this year, the federal indictment alleged that the socialite exploited girls as young as 14. In a report published on Wednesday, Molly Skye Brown, now 42, said Maxwell tried to recruit her as a masseuse when she was a 14-year-old in Palm Beach in 1992 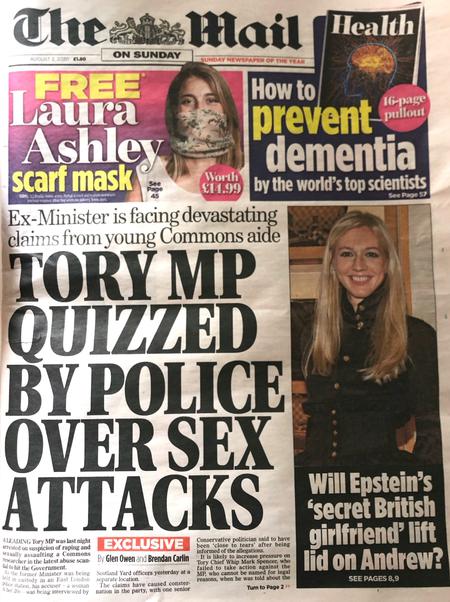 A secret ‘girlfriend’ of Jeffrey Epstein identified in bombshell court papers is a Manchester-born publisher turned ‘spiritual entrepreneur’ who took scores of flights on the paedophile’s ‘Lolita Express’ private jet. In a previously sealed email, alleged Epstein ‘madam’ Ghislaine Maxwell named a woman called ‘Shelley’ as the millionaire’s girlfriend between 1999 and 2002, during which time sex-trafficked teenager Virginia Roberts alleges she was coerced into having sex with Prince Andrew.
Load More
Close ✕